One of the reasons most of us love weekends is because you don't have to wake up to the most irritating sound in the whole world. Yes, you and the snooze button are saved from the weekday torture of the alarm clock. And finally you wake up either hungry or with a hangover, too late for breakfast and too early for lunch. And now is the right time to thank whoever invented BRUNCH, and the restaurants who offer a brunch menu. To make things more awesome Pinstripes offers a Sunday brunch buffet. The people who follow our blog can imagine how excited my husband was to find this. Yes, the man is in love with buffets, and you should definitely read his posts about buffets in Kansas City to know how deep that love is. Here are the links to them, Mediterranean buffet at Jerusalem Bakery and Mexican buffet at Pardo's.

Therefore, even the snow and chill couldn't stop us from heading to Pinstripes, Overland Park last Sunday. We were very warmly greeted by our server Robert, who explained to us where to find what as we explore the huge spread. He also informed us that their oven was on fire two days back so they couldn't include flatbread in the menu and offered pancakes instead. So we got hold of our plates and were ready to dig in.

We headed to the salad bar first and were quite impressed even by the look of it. If you think you hate salad and wouldn't bother to try, then you would miss a lot. While they it did have the good old ceasar salad and garden salad, the attractive once were tuna salad stuffed tomatoes, honey mustard chicken salad lettuce wraps and caprese salad (fresh mozzarella, tomatoes and sweet basil dressed in balsamic glaze). And right next to these was the seafood, smoked salmon and shrimp cocktail. And assorted breads, house-made pastries and bagels to accompany. I know this already sounds more like a lunch or dinner menu from a good restaurant, behold there's much more to come. 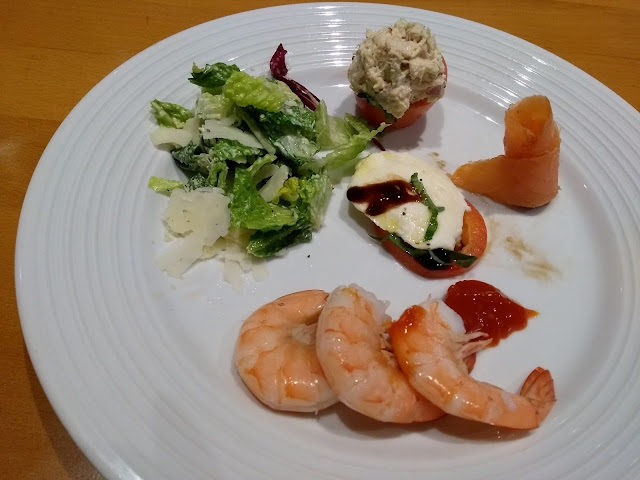 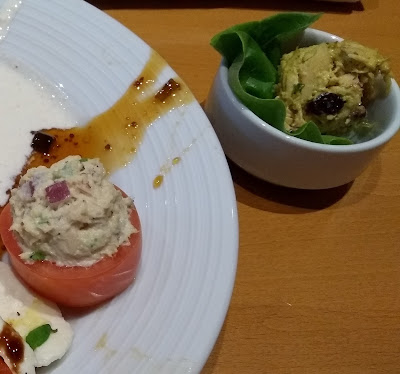 Next we headed to the omelet station. Yes, made to order omelet with ingredients of your choice. 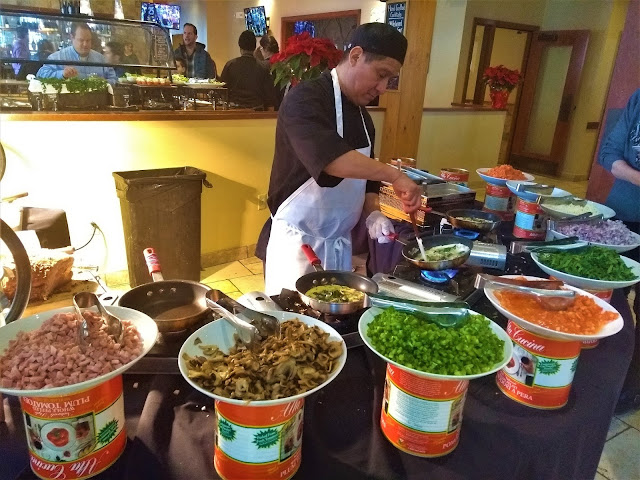 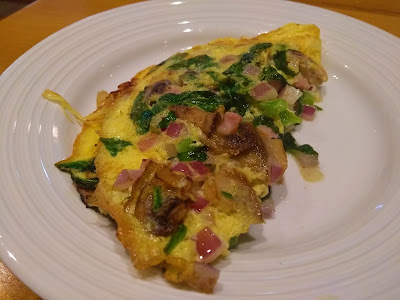 Right next to the omelet station was the carving station. It had herb crusted prime rib and maple glazed ham served with horseradish sauce and au jus. The prime rib with the horseradish sauce was one best tasting things in this entire brunch spread. And let me inform you that the competition was tough. 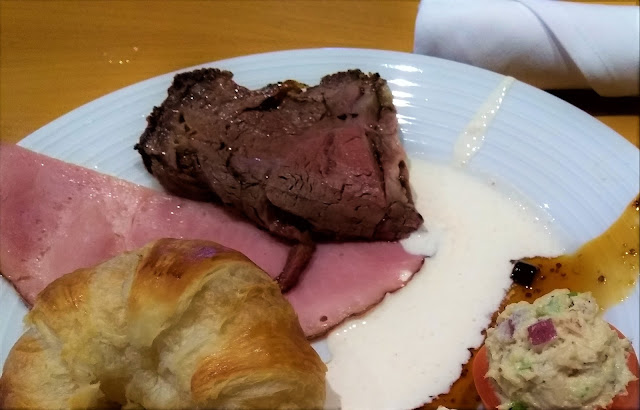 We had already devoured more food compared to a regular meal and yet we were not even half way through the available options. So our next stop was at the classic breakfast items part. We had breakfast potatoes, applewood smoked bacon and breakfast sausage and skipped the vegetable frittata. Right next to it was pasta in marinara sauce and meatballs. I was too full for the pasta yet couldn't let go of the meatballs, so took some just to try. The meatballs were a little dry while the sauce was standard. There was also some Tuscan chicken which we didn't enjoy much. The spread also had a kid's table with mac and cheese, french fries, scrambled eggs and crispy chicken tenders. I also couldn't resist some french fries, I mean who can? So, the breakfast items were good in itself but the things we tried before had already raised the bar too high to make it incredible. On any other day in any other menu they could really be the stars. 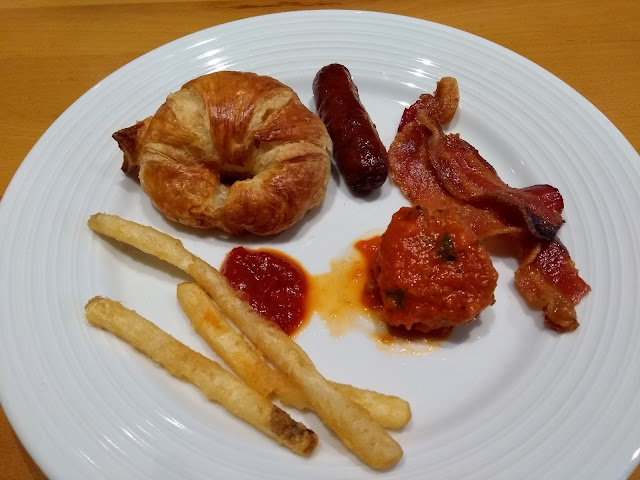 By this time I was almost beyond the mark of over-eating yet giving up dessert would be a sin on Sunday brunch. Therefore, soon enough I found myself at the waffle station. And there too I was spoiled for options. They had fresh strawberries and banana with balsamic cream, bananas foster, whipped nutella and warm cinnamon apple sauce to choose from. I remembered that Robert had recommended the balsamic cream so I went with that and some fresh strawberries and the apple cinnamon sauce. Oh and the waffle of course. And it was definitely one of the best waffles that I have ever tasted. 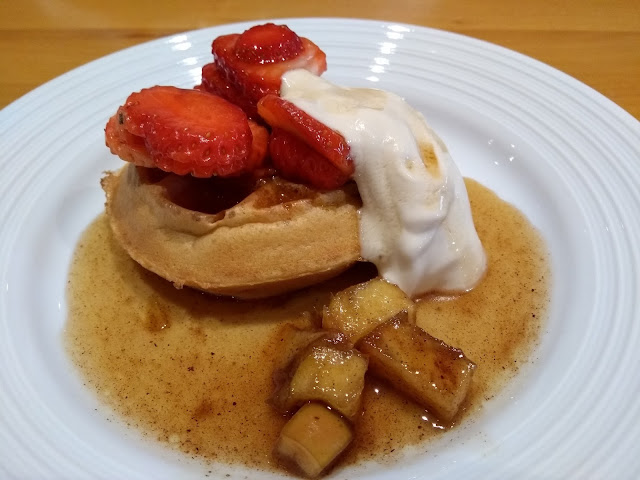 Accuse us of gluttony if you wish but that was not the end of it. There was a sweet table too with a chocolate fountain and we did check that out too. There were rice krispy treats,
fresh strawberries and marshmallows  on sticks to be dunked into the chocolate fountain. The house-made dessert selection also included carrot cake, brownies, caramelized cheesecake, Frangelico chocolate cake, cookies and biscotti. 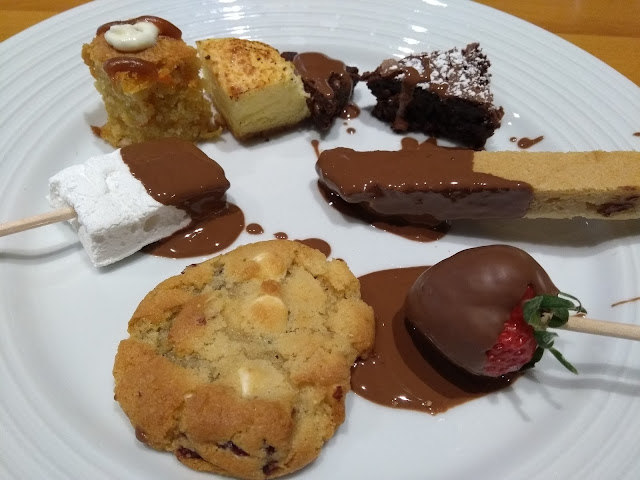 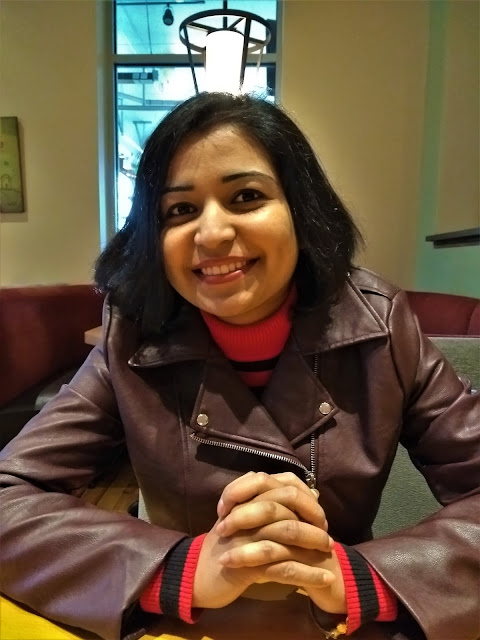 It was hard to even move with all that food in my stomach. I was literally feeling high of over-eating. Although I don't endorse over-eating and my regular portions are pretty small but in a buffet it is simply hard to avoid. More so when looks so enticing and tastes delicious. The ambiance too was good and family friendly. I would also give high marks on service as we got full attention from our server even though the dinning room was totally packed. So, would I do it again? Yes, but after a considerable number of Sundays.