My friends often used to say “Swakshar, you are a nemesis for the buffet restaurants!” I loved to think that they were amazed by my critique of comfort food and the ways to eat them. But in reality they were actually appalled by my colossal grub or the general ruckus I used to create when visiting the wonderful buffet restaurants in Kolkata, India. The quintessential Indian comfort food which I like to refer to as pleasure food, undeniably tastes different from the fare served in the Indian restaurants all over US. It can’t be contained to any particular cuisine; it can rather vary between Mughlai, Indo-Chinese and seafood. There are several such joints in Kolkata that surely serve this wide range of cuisines. And I like it. I like this change of taste, flavor or mood while enjoying all of them in a single meal.

Good buffet restaurants in general, rouse a part of my brain which makes me feel very happy, as a result, always "the general ruckus". So, when I came to Kansas City, my obvious propensity was to look for some buffet restaurants which are second-to-none, in terms of taste and authenticity. Yes, that’s my new passion, authenticity. Being in the US, where people from various cultures, come and create joints where they serve their kind of food, it often changes to fit the liking of the local crowd. To do that, sometimes the cuisine itself gets changed. However, that’s a deep and different topic; maybe I’ll discuss that on a different blog post. Coming back to the point, my keen taste buds kept on longing for an authentic buffet, until the first encounter with this wonderful Middle Eastern (the owners call it Mediterranean) restaurant. And yes, it was a love at first taste. 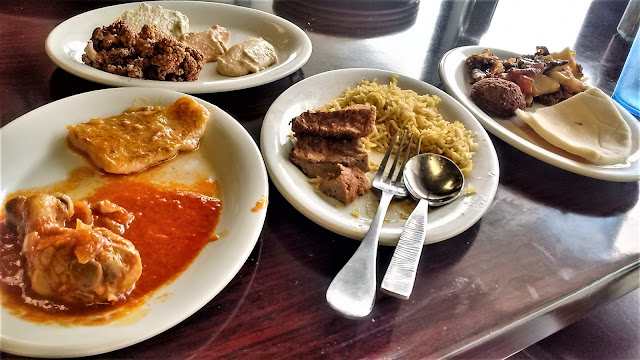 Like we don’t remember the beginning of most of our dreams (like Nolan taught us), I don’t remember how I found this gem of a restaurant. May be I had read some good reviews on the internet, I am not exactly sure. But Middle Eastern being my one of the cuisines I drool over, I tried nevertheless. The first thing that caught my eyes in their spread was the elaborate vegetarian options and by god those were delicious. India is the paradise of vegetarian food, considering that, this was more subtle, more delicate yet well at par in terms of taste and quality. There were three to four different types of salads, tossed often with feta cheese or sour cream. The use of olive was plenty but not overbearing.
There was Hummus, of different kinds and refreshing. The Falafel was very fluffy and crispy. There was Dolma (stuffed grape leaves) stuffed with cheese or cream. I have eaten Dolma before, but this one was exceptionally light and the filling was not too powerful, which lets the grape leaf to be enjoyed as well. But the crown jewel of the vegetarian menu, most certainly was the Sumac sprinkled cauliflower salad. Sumac is a reddish-purple powder made from ground fruits (drupes, a type of red berry); it is used as a spice in Middle Eastern cuisine to add a tart, lemony taste to salads or meat. This recipe was surprisingly different, exceptional and oh, so yummy.
Then there was meat, in different shapes and sizes, adorned in different colors and flavors, primarily lamb, beef and chicken as pork is not eaten in these parts of the world for religious reasons. The Gyro meat had to be there, the most popular sort, along with Kebabs and Kiftas. The Gyro was very well-spiced and perfect to go inside the Pita pockets. The Pitas were fresh from the fire, soft and wonderful. The owner of the restaurant came to our table and specifically requested us to taste the Kifta, which was ground meat and potato, fried to golden perfection along with caramelized onions and other spices.
There were different sort of chicken dishes, fried or in form of red tomato based curry. Honestly, I was not too impressed with the chicken preparations. However, I was very impressed with the Pilaf that the owner suggested us to go with the Kiftas. Among the array of meat, there was however a welcome change in the form of a crispy fried fish, most likely Swai. The batter was perfectly seasoned and fried; I enjoyed it with a squeeze of lime.

I was terminally full and then I realized that I haven’t even looked at the desserts yet. The only dessert was the rice pudding which was okay. I didn’t mind that a lot as I didn’t have enough appetite or better to say enough space left in my stomach. The chef-owner was a very warm person and he was often checking on us to make sure we are pairing the right dishes and rest of the time he was seen cooking right behind the counter. The decor of the restaurant is rather like a casual diner, with almost no ornamentation. Clearly the owner had only focused on the food. Overall, it worked for me, actually worked great. I felt absolute bliss when I returned a few months later and it surprised me with new items on the menu like Moussaka and others. The love deepened and I am definitely going back again.
Note: This post is not sponsored by the Jerusalem Bakery; I paid for all my meals.