Skip to main content
Labels
Posted by Swakshar May 15, 2017

When our blog and related social media outlets were getting flooded with dieting, healthy recipes and other "good for you" stuff, I was getting verbally thrashed by my friends for being so out of my place. All who know me and my eating fixations, surely were in shock and most certainly disturbed by my apparent change. To the point that one of my friends even denied that he even knows me...just think. As if, Swakshar is on a diet feels like a penguin sunbathing in Bahamas. Come on guys, don't make it such an outlandish situation, it can happen.
Well, to be true I was dieting and it was fun. To detox and loose a few kilos (or pounds) was a welcome change for me and I might do it again. But now I am on a break from that and how? Nothing can be more apt than to binge on a lunch buffet. In the context of eating out, lunch buffet is like my pinnacle, like a floating paradise, don't laugh, it is. If you want to learn more about my love for buffet, refer to this previous post where I explained our ever so happy relationship. Here is the link My buffet journey - Jerusalem Bakery. You should totally read this to get the context. I am planning to do a trilogy about my buffet experiences, like a nascent filmmaker in me always wanted to. Since I love to go to buffets, I always try to find different kinds, like the cuisines such as Mediterranean or Mexican where you won't find too many buffet options. The search is still on, for more.
So, this was not our first visit to Pardo's, we have been here before. It is located in the heart of Kansas City's Mexican district (as we lovingly call it) on Southwest Boulevard and has been there for about eight years now. This place is sandwiched between many other restaurants and cantinas, all of which are craving for your attention. However, we got hooked to Pardo's. The food that you'd eat here is authentic to its bone and has no similarity with the food of majority of restaurants that claim to server you as Mexican food (they are not, they are serving you Tex-Mex, darn!). The food here is complex in terms of flavors, yet hearty and simple enough to cater to the hard working folks whom I mostly see there as patrons.

As always, I started with the salad which was very simple yet delicious. Cucumber, tomato, lime and pineapple were cut in large chunks along with the finely chopped onions and cilantro, crowned with roasted Jalapeño. I sprinkled a little chili, salt seasoning to satisfy my 'give me more heat' taste buds. 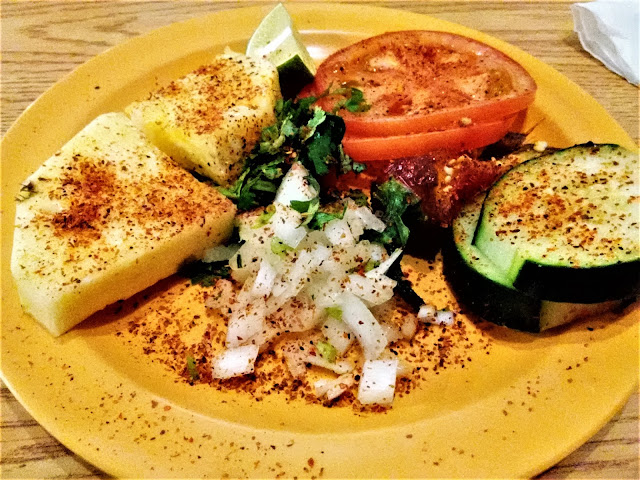 Next up was the wonderful Caldo de Camarón y Pescado which literally translates to Shrimp and Fish soup. A simple yet highly appetizing dish, made with shrimp in the shell, fish (seemed Swai to me), carrot and celery. I had to spend quite some time peeling the shrimps but I liked the fun of it. The broth was rich in flavor and very light at the same time. 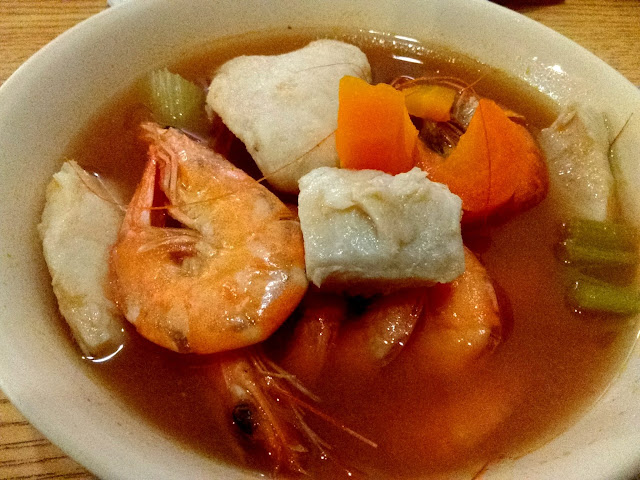 The Chile Relleno (stuffed roasted poblano peppers, covered in batter and fried) and re-fried beans were authentic and tasty. 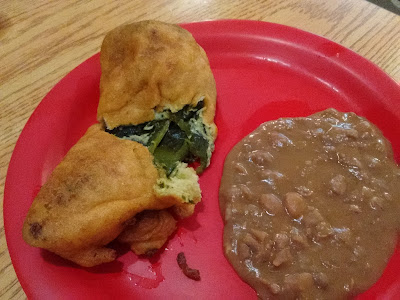 My wife created soft tacos with flour tortillas, ground meat, sour cream, pico de gallo and chili verde. She squeezed some lime on it. It turned out nice. 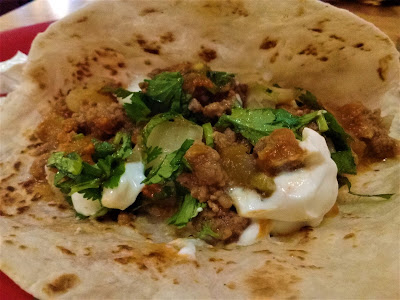 I tried a mixed plate of Nachos (I am not a fan of nachos), rice, tamale and some beans again. The nachos was OK and the Mexican style rice was cooked perfectly. The Tamale was great, the stuffing (meat, mostly pork) had a very subtle smokiness and great texture. My wife tried a veg Tamale, it was fine. But the meat variety was definitely better. 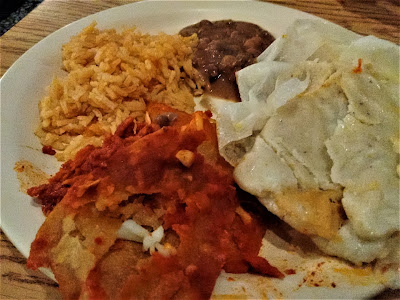 There was also a shrimp fried rice short of  dish which was very light and an easy grub. 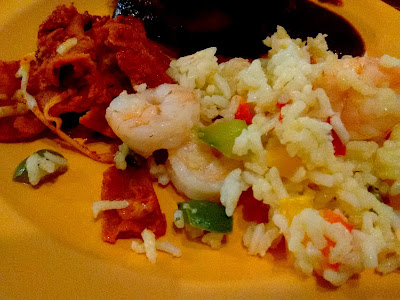 The buffet had two chicken items. The one we tried first was made in a chili and tomato based gravy. It chicken was tender and the sauce had perfect blend of spices and tasted really good with the Mexican rice on the side. 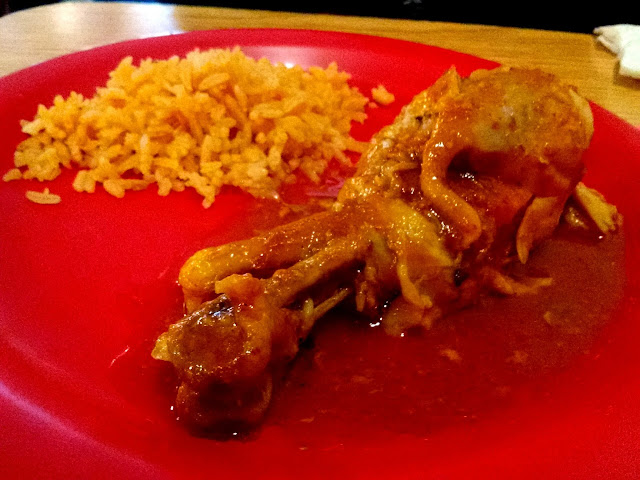 The second one was Chicken in Red Mole. Red Mole (sauce) is a chocolate and chili based sauce which is considered to be a delicacy in Mexican cuisine. It is generally made for special occasions and the traditional recipe can take up to 36 hours of prep time to get the most authentic flavor and taste. This red mole was A-M-A-Z-I-N-G. The best one I ever had. I was blown away into pieces after my first bite into the very tender and juicy chicken. The sauce was literally playing a sonata inside my mouth. Please bear with my over-the-top metaphors, it is the re-culmination of the sauce what is causing it. 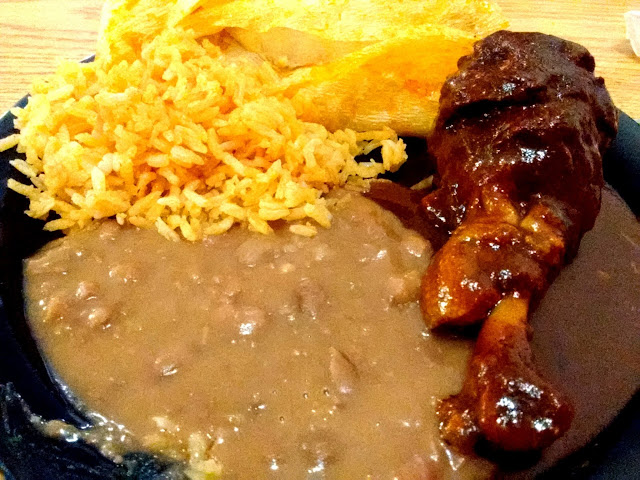 The dessert section had a nice sweet potato soaked in a cinnamon flavored syrup. I had that along with a piece of pineapple, after suitably bathing pineapple in the same syrup and sprinkling some chili salt seasoning to add a little kick to it. 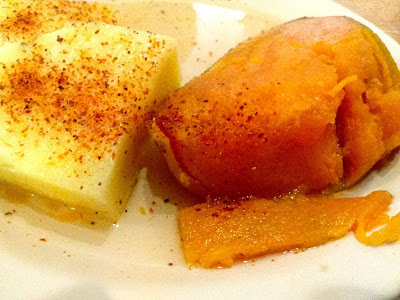 I was very surprised to taste the Arroz con leche. It was starkly akin to what we Indians make as 'Payasam' or 'Kheer'. Rice cooked in milk, until the milk is thick. Seeing two dishes which are so similar which originate in two completely different parts of the world was amusing. 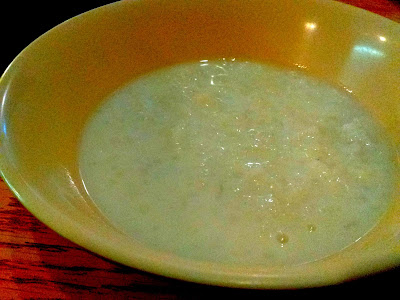 The buffet also had pasta salad and Fettuccine Alfredo for the least adventurous visitors.

The write up would be incomplete if I don't mention about the restaurant staff. They were always smiling and willing to help, in spite of the language barriers (we don't speak Spanish and they speak very little English). We were clicking photos and every now and then kept asking them about the dishes. To help us, one of the wonderful ladies even wrote down the Spanish names of these dishes on a piece of napkin. Overall it was an awesome experience and definitely good time. Everyone who wants to taste authentic Mexican cuisine must visit this place.

Note: This post is not sponsored by Pardo's Mexican Buffet; We paid for all of our meals.
Labels: buffet chicken dessert diet eating out kansas city seafood