It is strange how something extraordinary happens when we are least expecting it. Even though we live in this highly advanced era of technology, we still have to leave certain things on destiny. A trip to Alaska is almost incomplete without getting a glance of  'The Great One' or Mt Denali, the highest peak of North America. But it is sheer matter of luck as the mountain is hidden behind a blanket of clouds most of the time. And it is very difficult to keep your hopes high when you just have one day to spend at Denali National Park due to a fully packed trip itinerary.

So, it was 3:30 a.m and we stepped out of our room prepared to check out of Mt McKinley Princess Wildness Lodge, Trapper Creek and leave for Denali National Park for the day. We had the least idea of the sight that was about to unfold in front of us. The sun had painted the mighty Mt Denali (erstwhile Mt McKinley) in golden-red and it made our day even before we headed towards the national park. 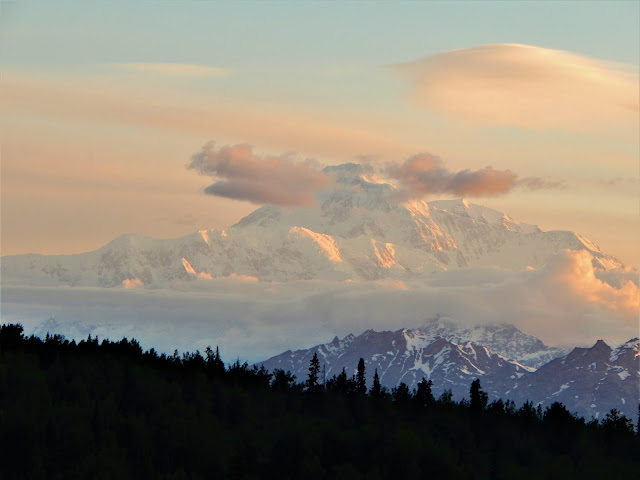 It is hard to describe the magical moment. You could sit back and spend an entire day just admiring the changing colors of this scene, but we had plans to get a little closer and explore the diverse flora and fauna of Denali National Park and Preserve. 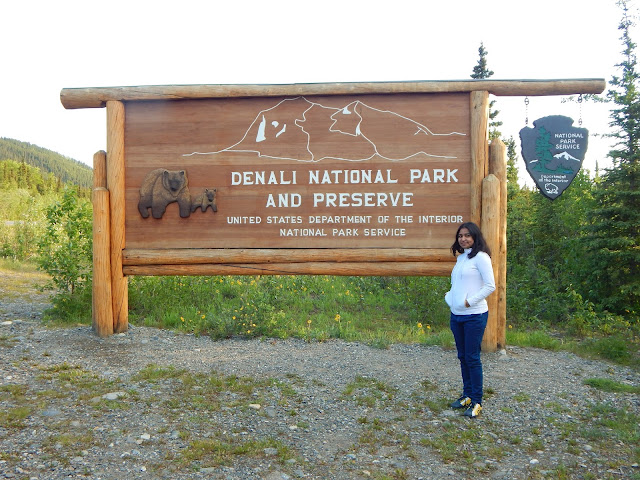 NOTE :
On entering the park visitors have to leave their vehicles at the visitor center and hop on a park bus to go deep into the park. Private vehicles are only allowed up to 15 miles (Savage River Check Point) into the park. The buses make various designated stops on the way picking up and dropping off visitors at different points of interest on its way to Kantishna (the last stop on the bus route). The total scheduled time from visitor center to Kantishna and back is 12 hours. So it is advisable to book an early morning bus ticket in advance (through national park website) if you plan to spend only a day at Denali during the peak season.

The six million acres of wild in Denali is bisected by a single road. Every turn on this winding road has a surprise awaiting be it in the form of wildlife sightings, vast valleys, a slowly running creek or river or a stunning view of the mountain. As we boarded our bus, Wendy happily greeted us. She was our driver cum guide for the day. She shared interesting facts and other valuable information on the park as the bus took to the rugged road. Our very first surprise of the day though was not any of those pleasant ones mentioned above. It was an unpleasant one within 15 minutes of setting out. You have guessed right if you thought that our bus broke down. We had to wait a good 30 minutes till the our backup ride arrived and we started again. 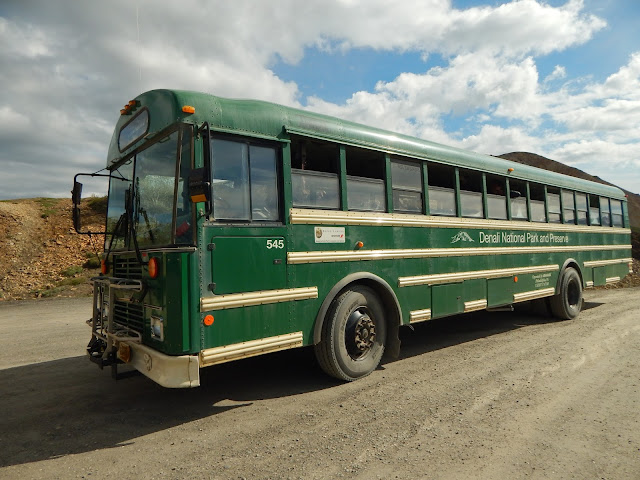 Soon enough as our bus crossed the Savage River Check Point, we spotted our first wildlife sighting of the day. It was caribou taking a morning stroll by the river. Caribous belong to same specie as reindeer but they are wild, never tamed and larger in size. 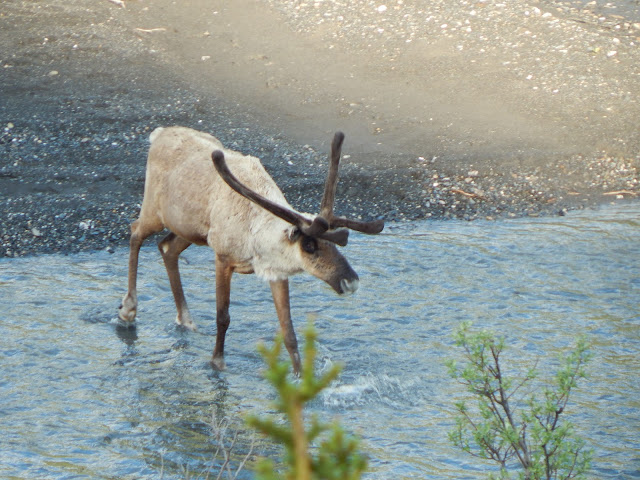 The buses make a stop when any wildlife is spotted for good viewing and photos. Bus drivers have their own hand gestures to indicate any specific sighting in proximity. This is because shouting out can scare off the animals. Wendy taught them to us too. She also mentioned that it is funny how the animals are not repelled by the sound of the bus engine and can come up pretty close but human voices offend them. Soon enough she stopped again and pointed at a willow ptarmigan inside a bush. This is the state bird of Alaska. Wendy mention how these birds adapt to the changing seasons in Alaska. Their feathers turn completely white in the winter months to camouflage in the snow and brown in the summer months. 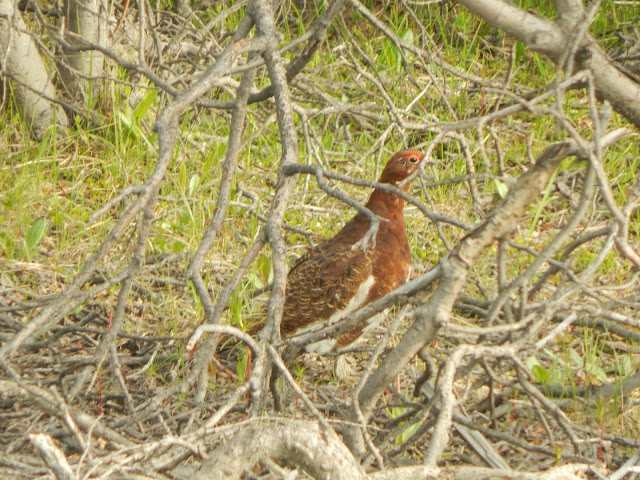 As we headed towards our first designated stop at Toklat River, Wendy made another sudden stop. And we saw one of the most spectacular sights. It was a mama bear with two cubs within a feet from the bus. The cubs played happily as they followed their mother. It was like watching National Geographic live. The pictures do little justice to the moment. 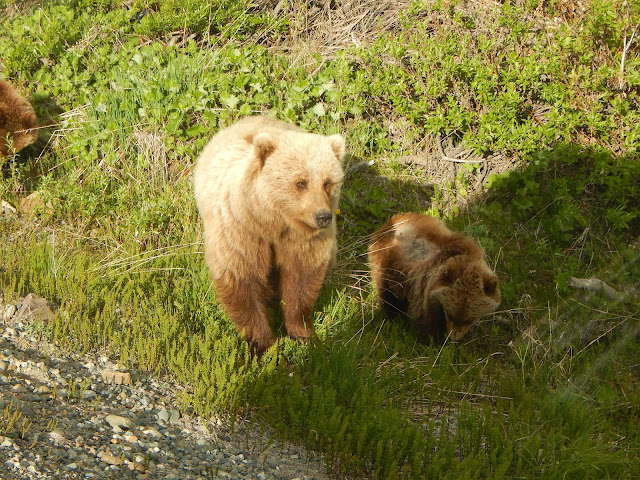 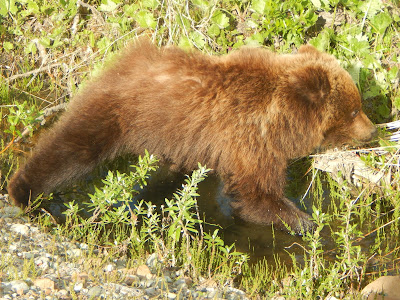 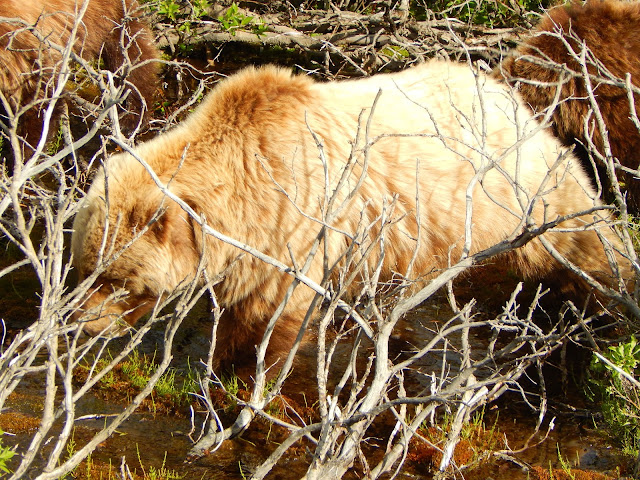 The Toklat River stop has a nice view of the river valley. It also has some interpretive display. There are some moose and caribou antlers kept there for the visitors to hold an feel. You won't know how heavy they are unless you lift one. 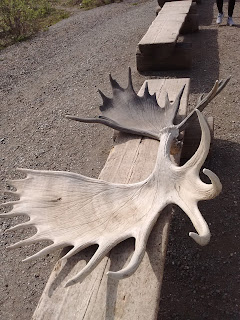 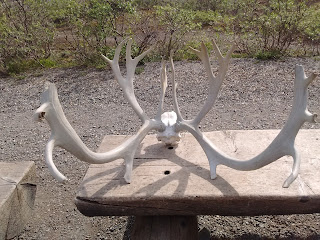 We started again going deeper into the wilderness. Wendy mentioned that the most spotted animal is the caribou and only lucky people get to see a moose. It was only minutes after she made this comment one of the passenger spotted a male moose grazing to glory. 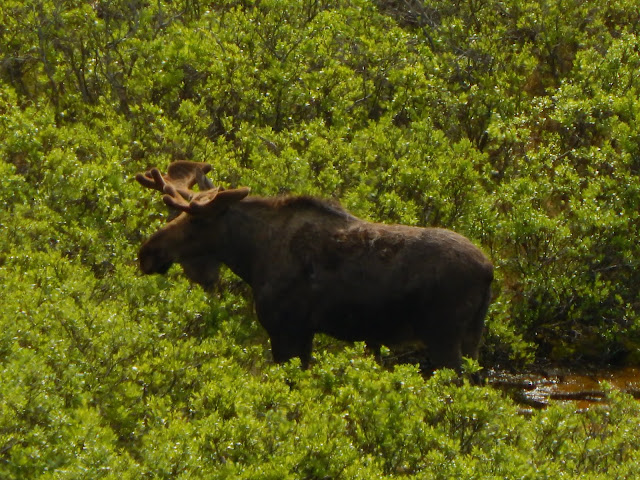 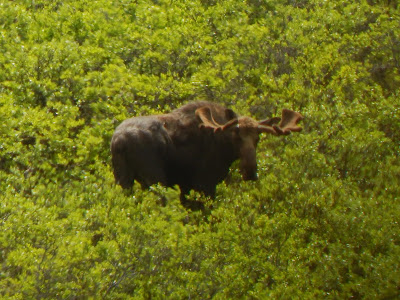 Wendy happily mentioned that it was one of the best wildlife sighting days and we couldn't agree more. We stopped at the Polychrome Overlook and the its vastness and colors were breath-taking. 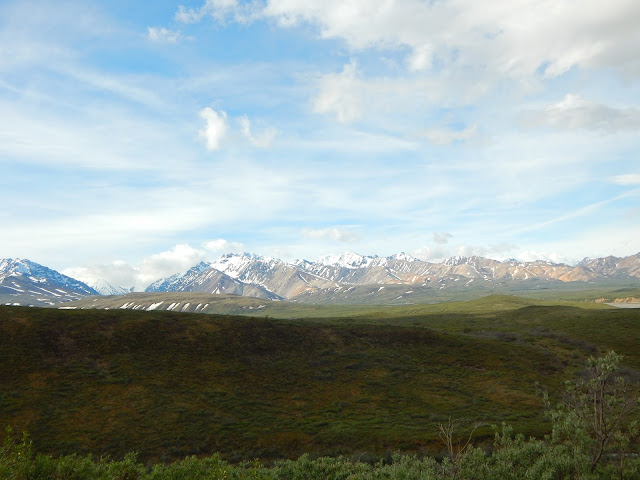 As we headed towards Eielson Visitor Center Mt Denali appeared at a distance. Its snow-capped peak glistened on that sunny day as it proudly stood with its head held high. 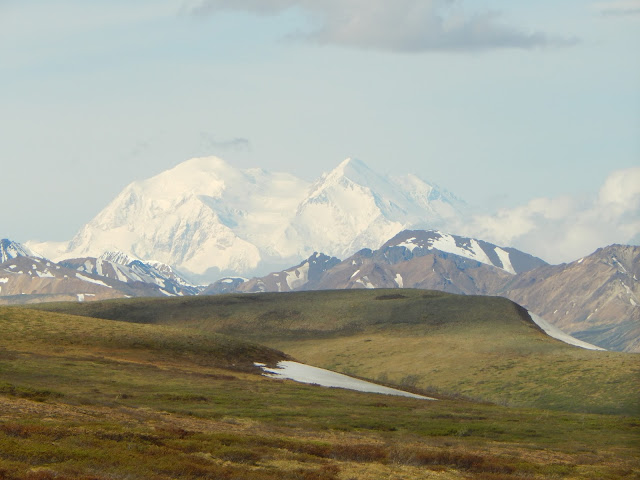 By this time we had seen so many caribous that we did not even stop for each of them. 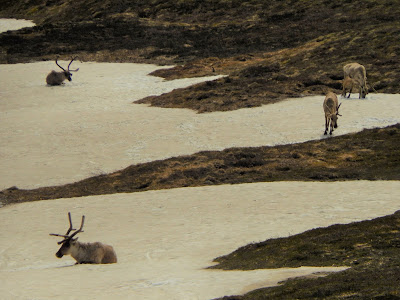 Yet on another turn of the road we stopped as this time we spotted a herd of mountain sheep. One of them gracefully posed in its white robe and large curved horns. 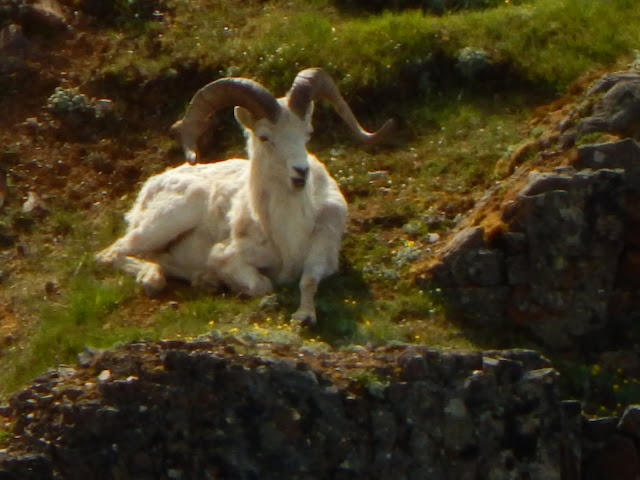 When the bus finally reached Wonder Lake it was late afternoon. It is amazing how the weather changes in the mountains. The sun was covered by a few dark clouds as we sat beside the lake. It was so serene that a 10 minute stop was not sufficient. So we bid goodbye to Wendy and our fellow passengers and waited there until the last shuttle bus came to pick us up. We almost had the place to ourselves for that time, until the next bus arrived. We were surrounded by the most soothing sounds of nature. 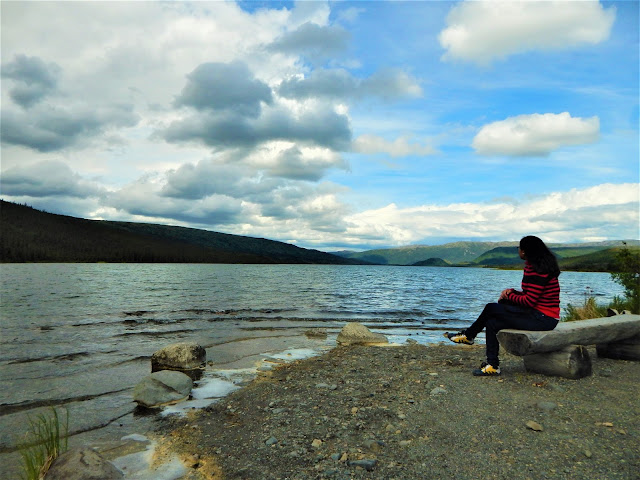 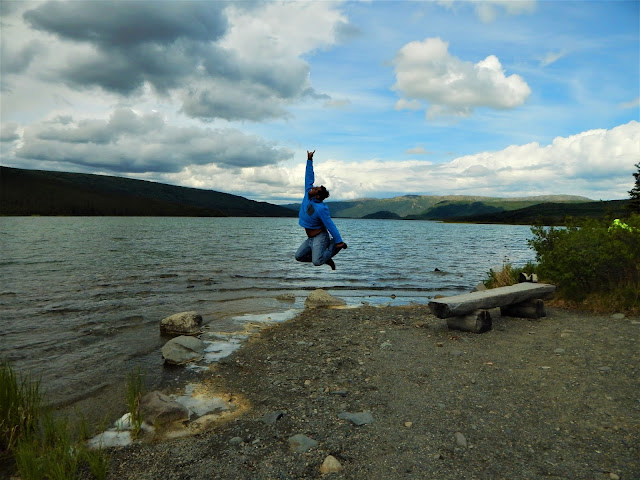 On our way back to the visitors center there was more wildlife to keep us glued to the bus window. A male bear coming down a hill slope. 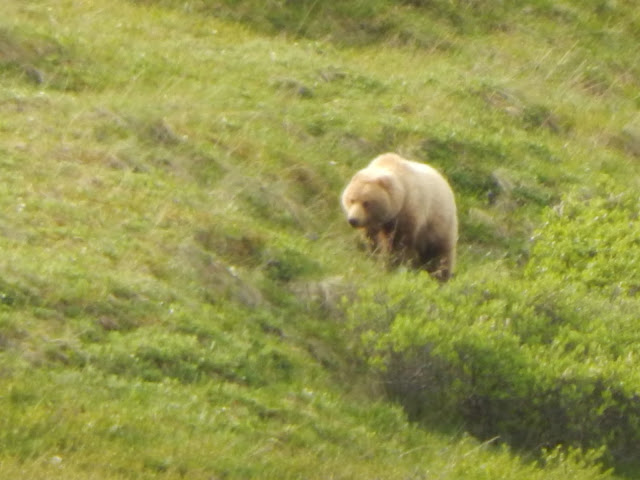 We were almost at the end of our journey when a mama moose crossed the road with her calf. 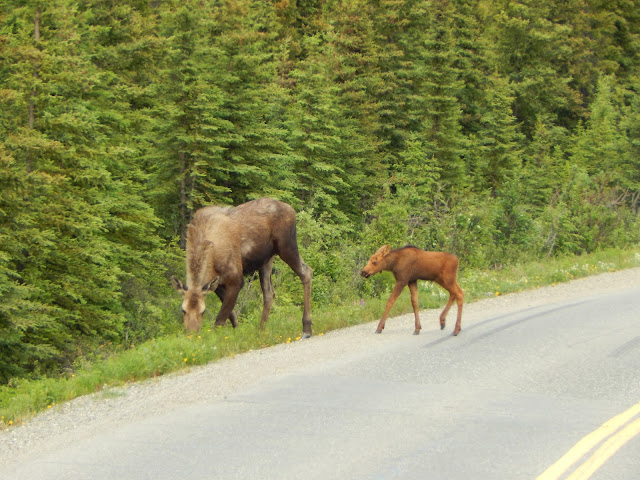 When we started for the day I was wondering how would we survive a 12 hour bus ride without being tired and bored. But less did we know about how much Denali has to offer in a single day. The range of vegetation from the low elevation taiga to the high elevation tundra, the vast extents of permafrost and the richness of wild habitat is mesmerizing. We left Denali behind for this time at headed towards Fairbanks.

ALASKAN ANECDOTES TO BE CONTINUED.. in the up-coming posts, stay tuned!