in bluish whites and whitish blues 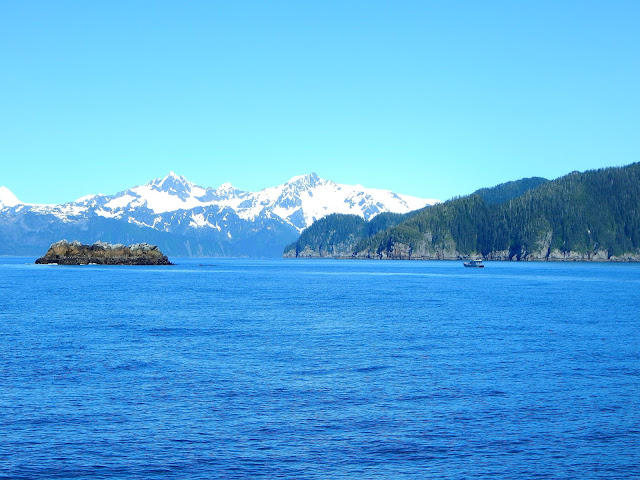 Its summer skies are quite insomniac with not more than a couple of hours of dusky doze. But the Beauty or you may call it the city of Anchorage was still fast asleep when we left her at day break with a promise to see her soon.  I had heard of many scenic drives in the past and had also experienced quite a few but what unfolded in front of our eyes now was kind of dreamy. Every turn on the Seward Highway running from Anchorage to Seward is impeccable. A large section of this drive is through the Chugach National Forest, therefore I intend to dedicate a separate post on it later in this Alaska series. So let's start right at our first stop at Kenai Fjords National Park, Exit Glacier. 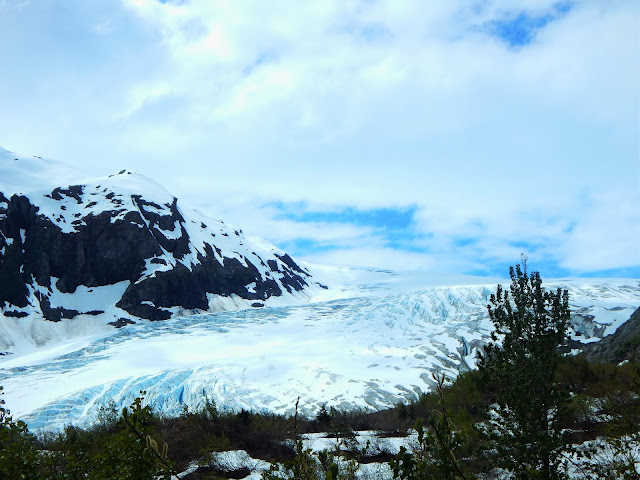 Exit Glacier is a part of the expansive Harding Icefield and is only section of the park accessible by road. It amazing to witness how this retreating glacier has carved the adjoining landscape over the years and is still active. 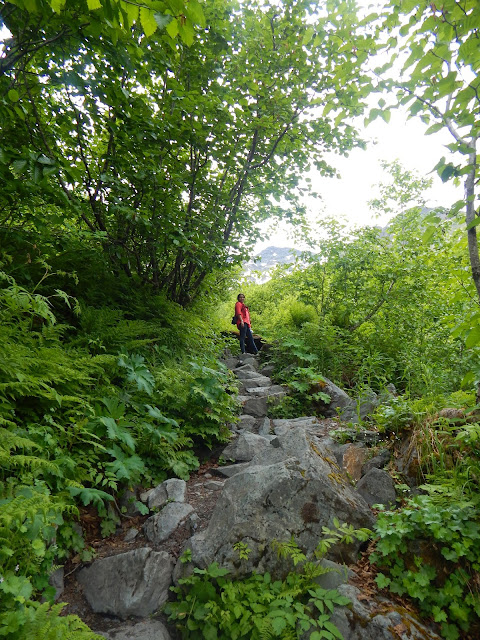 Trails diverging in the woods take you to different points to get a different perspective of the glacier.

The most adventurous of them is the Harding Icefield Trail, (8.2 mile loop). The trail passes through cottonwood and alder forest and then some open meadows climbing higher towards its end. The steep inclines might get strenuous from time to time but you can always stop and take your time to enjoy the view of the valley or the glacier peeping through the trees. And at times rest by an ever-energetic stream which will definitely boost you up. 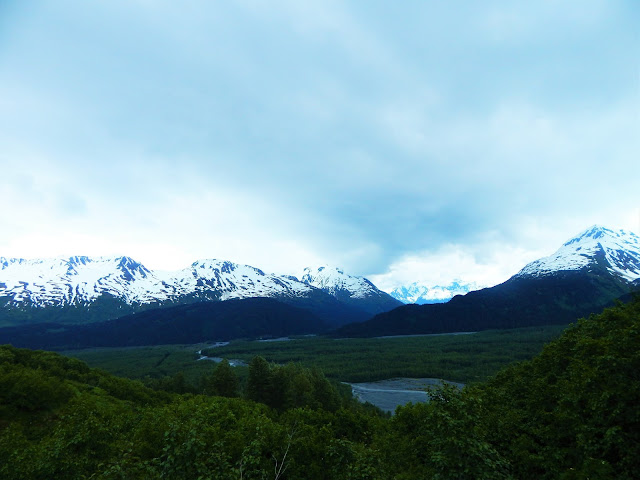 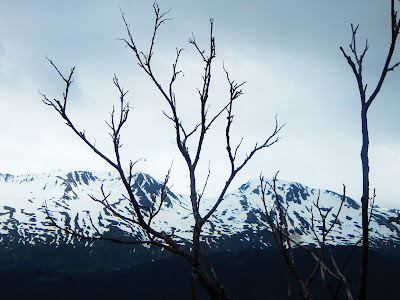 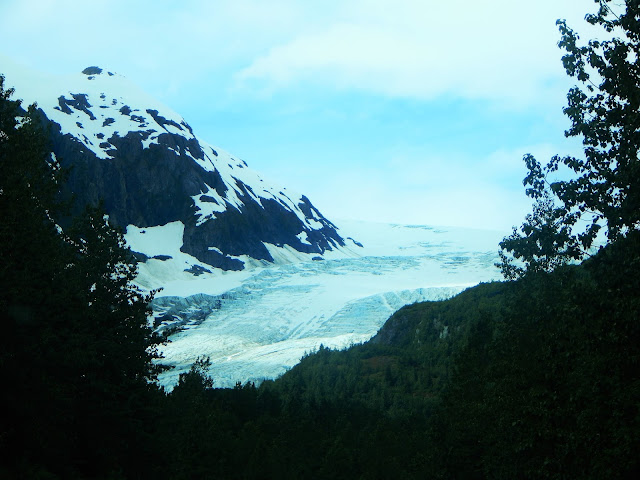 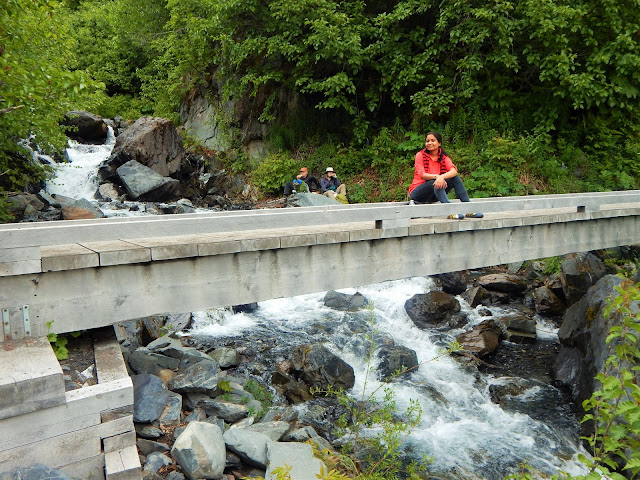 It was early in June and the upper portion of the trail was still covered in snow and we could only hike up to Marmot Meadows. That too took some walking on the snow where the trail was indicated by orange flags. The park rangers told us it wouldn't be advisable to climb higher without proper snow gear like crampons. 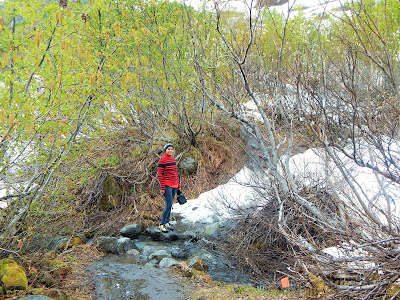 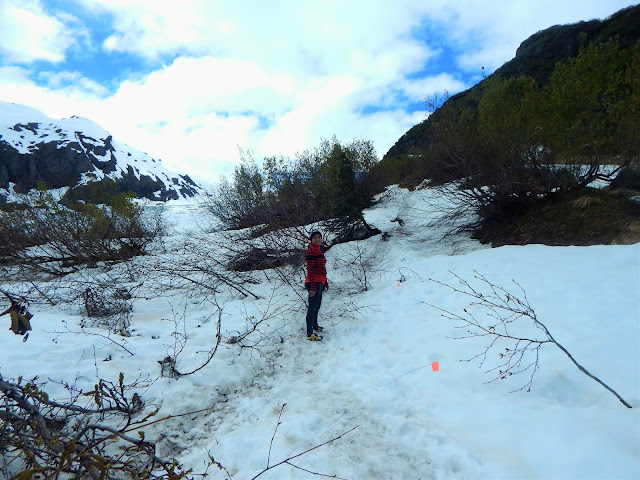 The view of the glacier from the Marmot Meadows was nonetheless spectacular. The bluish trenches of the glacial ice seemed like emitting some divine light. Such isolation, such close encounter with nature always changes something within me. It allures me more each time I am drifted away into the man-made world of selfish necessities. 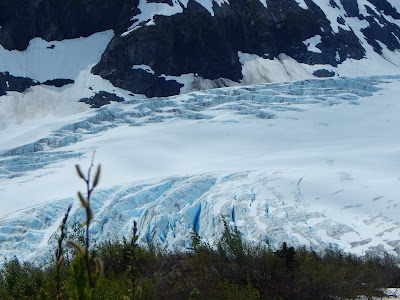 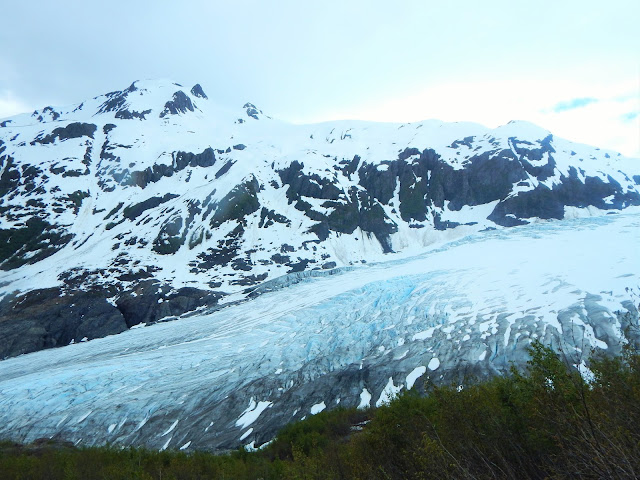 On our way of return we also hiked the short trail loop to the Edge of the Glacier. There are year markings along the way showing the recede of the glacier with time. It was alarming to see how it has receded about 200 feet only in the past three to four years due to global climatic changes. We left just hoping someone somewhere is thinking about it as we often are too busy to ponder on such petty matters. 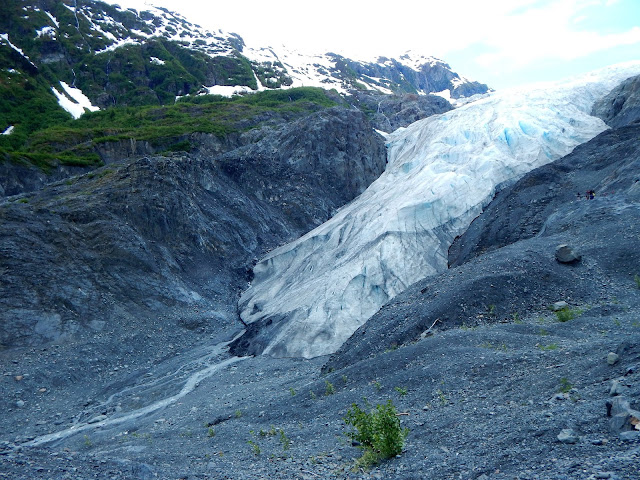 After a whole day of hiking, all we wished for was a cozy bed after reaching Seward but what we saw after opening our window surely messed up the plan. This is what was in front of us. 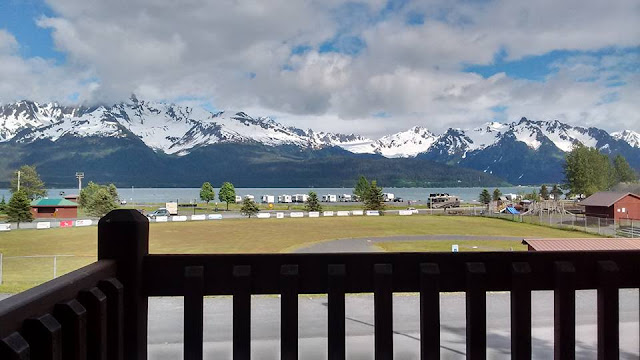 So the day ended with a cup of coffee on the porch trying to convince ourselves that this is all real. And then we woke up early and headed towards Seward port to board the day cruise of Kenai Fjords Tours. The six hour tour was packed with exciting surprises. The captain of the ship, Mark, was well equipped with information about the park and rhetorical skills. As the cruise left the Resurrection Bay and entered the open stretches of Gulf of Alaska, we were surround by shades of blue and white, of the sea, the sky and the snow covered mountains. 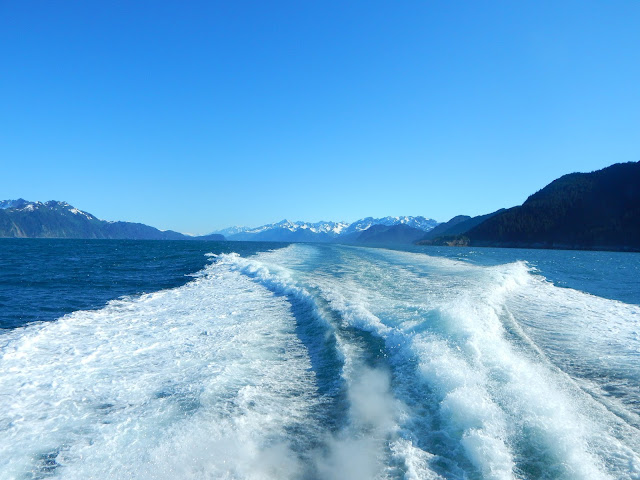 Mark put the ship to a halt in front of a large river of ice draining into the sea, called Holgate Glacier. He said we are waiting to hear the 'roar of the Gods'. And guess what? We did, as a large chunk of ice broke and plunged into the sea from the glacier, the sound of it was no less than what was suggested.
This also solved the mystery of the floating ice chunks all over in the water and on the shores. A crew member even picked up a small chunk for us to touch. We witnessed the breaking of ice for a couple of times more and headed for the rest of our tour, as a sea otter peeped out of the water and bid us good bye. 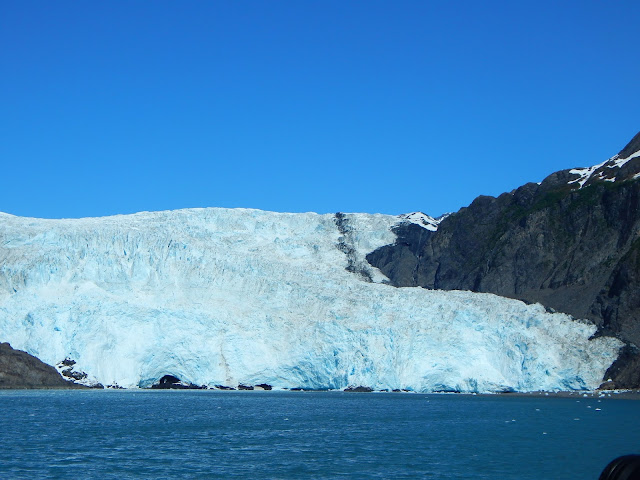 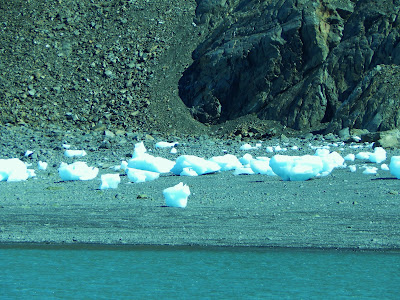 What came next is marvelous, and I quote our captain "it is one of the best wildlife sighting days of my entire career of twenty-two years". And we believed him, as we saw three humpback whales in a row, a large group of sea lions and harbor seals, sea otters and numerous birds, and captured a few through the lenses of our camera. 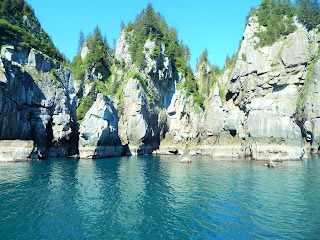 Kenai Fjords is one of the most unique national parks that I have visited, as it mostly accessible by sea, where you can watch creatures of the sea very closely in their natural habitat. We did not know how six hours passed and we came back to Seward. We spent rest of our day exploring the petite town of Seward. The boutique shops loaded with Russian items and handcrafted pieces by local Alaskan tribes, the taste of some local food and the blue water of the fjords made the never ending Alaskan summer day seem short. We knew tomorrow would be a new journey, a new destination and new story to listen to and tell. 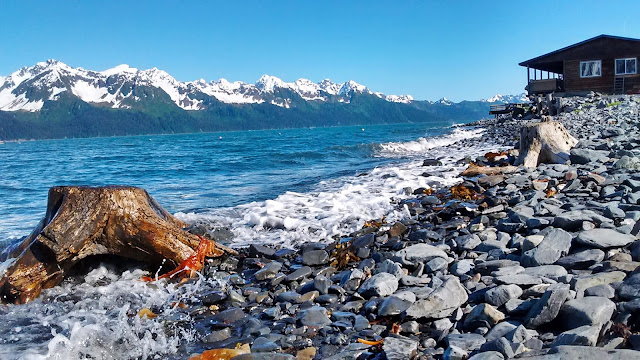