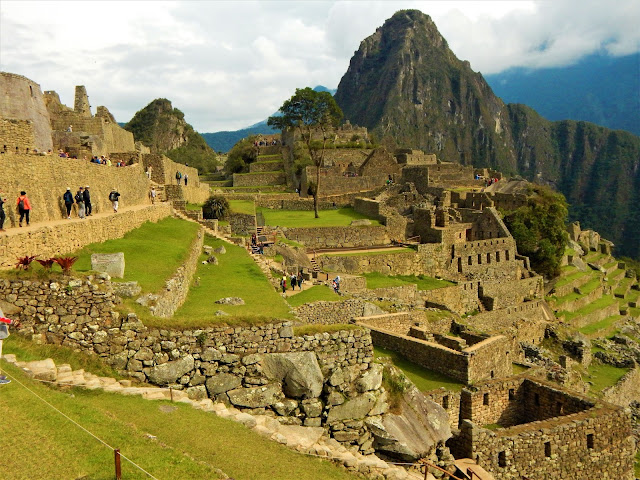 It was half past seven in the night, and how we say in Bengali, "a mouse was doing crunches in my tummy". We didn't eat substantial amount of food, a mistake, all day. We were hiking around and travelling back from Machu Picchu, the famous Inca ruin and were so mesmerized, eating literally became less important, plus we had a train to catch.


Now, being back in Cusco, the rat in my tummy was going crazy. The Polleria we entered and several like this are the most common eating joints in Peru. How common? Well, more common than a McDonald's in the United States or a Biriyani joint in India, my only two reference points, sadly. A Polleria or Pollo a la brasa, serves Peruvian grilled chicken, as the main component of the menu.
We always try to follow the doctrine of 'Eat like a Local' since we believe that's the best way to get into the local delicacies and deliciousness. So, we had to try a  Polleria, plus everyone who knows me knows, I LOVE CHICKEN, yes in capital letters. Most of these Pollerias, are independently owned and operated by locals. Having said that, they being locals, they speak Español. Aha! now the fun begins.

So, I was voraciously typing in Google translator that we need a menu as the waitress was looking at me curiously, not understanding what this strange looking man is doing. Yes, curious is word, and I know from where curiosity comes from. Firstly, looking at my skin color, they were puzzled whether I am from South America or from Africa. India? No, they didn't think of that. And moreover they were least expecting a foreign man so far from the touristy places of the city. That's one of the reasons we often choose to stay in local homes rented as BnBs. It helps us connect so much more. So, I showed her the phone, at first she didn't understand what I was up to but then she figured it out. She read it and replied. And of course, I didn't understand. I was cursing myself, but I had to find a work around as the mouse was getting more and more vocal about its existence.

I gave her my phone, she awkwardly took it and giggled, so did another girl by her side, I didn't notice her earlier, she must have come to the rescue of her co-worker or not to miss the amusement. I gestured her to type, she typed in something and I saw Google did a jumbled up translation that they serve only one item. She pointed at one of plates which was whooshing past me and finally landing in someone else's table. That night Peru was playing Colombia in the world cup soccer qualifier, the streets were empty and the little Polleria was packed with folks who were eating less and watching the game more. The guy on whose table the chicken landed, didn't give a damn about it. I looked at the unattended chicken like a boyfriend whose girlfriend didn't marry him but invited him to the marriage reception instead.

Among the very enthusiastic Peruvian soccer fans, we crammed ourselves in a small table next to the salad bar. I started making trips to the salad bar as we waited for the chicken to arrive. First, came a bowl of chicken soup with chicken feet. We did the soup but passed on the feet.
Then, came the moment of truth, with a drum roll in my mind. A quarter of a whole chicken royally sitting on the bed of a very delicious french fries. Peru produces more than three thousand varieties of potatoes. So some kind of potato will always accompany almost every dish you order in Peru.


Coming back to where I was, the first bite into the chicken and like I say, I was "floating a few feet above the ground". It was so tender, melt in the mouth and super duper flavorful. And the skin was nicely charred and crispy. I didn't dare to ask the kind of spices that went into its making, since I was very confident about my lack of language skills. 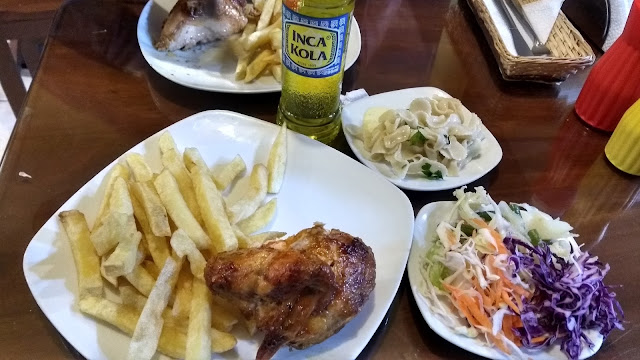 We also ordered some Inca Kola, a very popular in Peru, to make the meal perfect.

I finished my meal and started peeking into the open kitchen and I saw the whole chickens were getting marinated and then grilled over wood fire for a long period of time giving it an amazing flavor.

With my intent of clicking a photo of the oven, I asked, 'Photo?'

They said, 'Si, Si' and giggled over again. 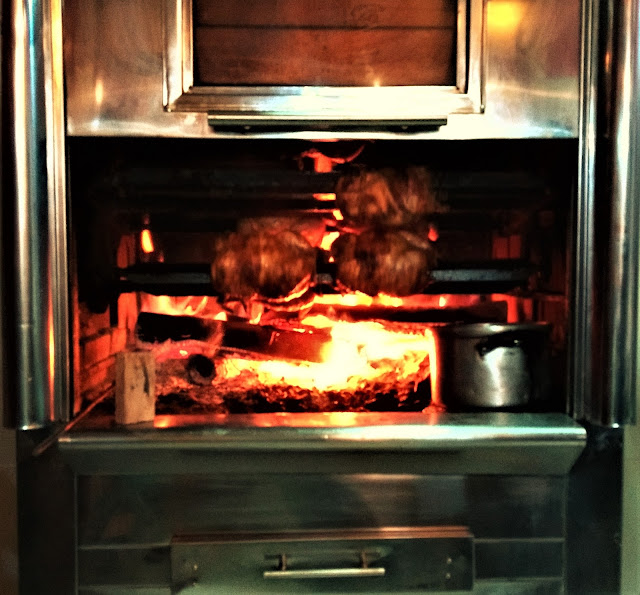 I was glad that all the other patrons of the Polleria were glued to the TV, and virtually teleported to Lima, where the game was being played. Otherwise, I'd had made a laughing stock of myself. As we were leaving the Polleria with a great satisfaction, the game also finished. Locals started conversing about it and started to leave as well.

The score was a draw that day, and Peru would fight in a play-off with New Zealand in November. #contigoperu