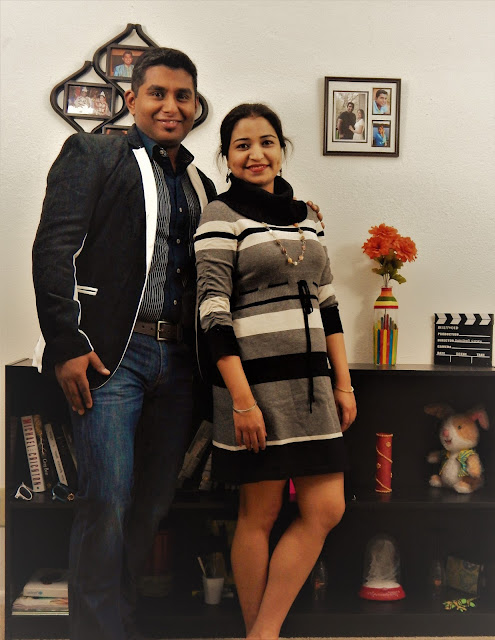 We celebrated our third wedding anniversary on the 17th of last month. It's been three years of living every moment, living the bond to its fullest as we cherish every little thing that connects us. I know the popular saying is opposites attract but what goes beyond attraction is like-mindedness. Its amazing to be on a never ending journey when you have the perfect companion. Each day there is something new to explore and experience in this big and beautiful world and that starts right at our doorsteps.
As you might know already, that one of many such things that we love doing together is exploring different kinds of food from all over the world. And we got to do it again on our special day at Krokstrom Klubb & Market where Chef Katee McLean traces back her Swedish roots and presents her take on traditional Scandinavian delicacies. 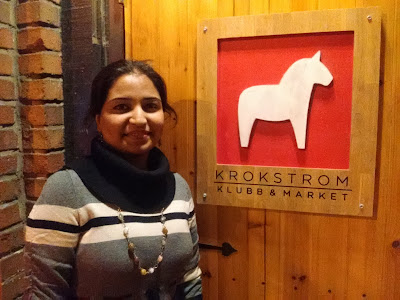 It was a busy Friday night at this restaurant, but we were warmly greeted by our server Hanna. She offered us help to go through the menu as some Scandinavian items might be unfamiliar. Honestly, my Scandinavian food knowledge was limited to Swedish meatballs and chocolates at IKEA and some Danish butter cookies. Therefore, I had lot of questions about the menu and she happily answered them all. The menu itself is very engaging as the preface encourages the concept of shareable plates, followed by the well defined courses. All the items seemed enticing to me in their novelty and I wanted to taste almost everything. But I settled for being sane and we decided to choose one thing from each course.

The first course was Mumsa which means 'to munch' in Swedish, basically appetizers. We went for the Finnish Ostbrod (cheese bread). The dish comprised of juustoleipä (Finnish squeaky cheese), cloudberry jam, radish and fennel. The texture of the cheese was the catch of the dish with grilled crispy outside and gooey inside and how its sharpness gets balanced by the unique sweet and sour tone of the cloudberry jam. Couldberry is indigenous to Scandinavia and popularly used in their cuisine. 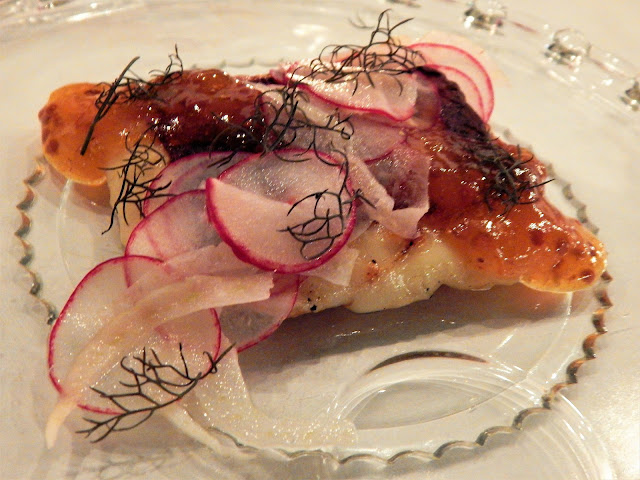 The second course was Scandinavian Charcuterie. We ordered the Cured Meat Board, different types of cured meat with house-made pickles and mustard. I was especially intrigued by the unique tangy flavor of the mustard condiment and I must mention that I had tasted nothing like it before. The pickles paired well too with the briny cured meats. 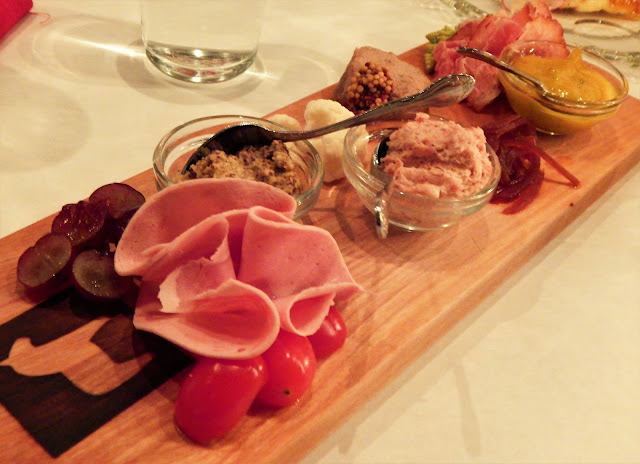 The meat board also came with a side of toasted bread, knäckebröd (Swedish rye crispbread) and house-made whipped butter. 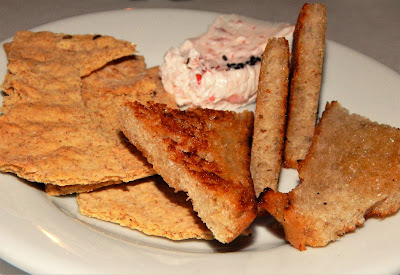 Krokstrom also has a great bar offering a large selection of aquavit, Scandinavian beers and mead (honey wine). Drinking of aquavit is an integral part of Scandinavian culture and festivities. I struggled between aquavit and mead (actually I wanted both) then Klapojster caught my attention. It is mead blended with Danish aquavit, and I said 'that's perfect'. We also ordered some peach flavored mead. I think choosing mead was a good decision because its sweetness complimented the prominent sweet and sour play of flavors in this cuisine. 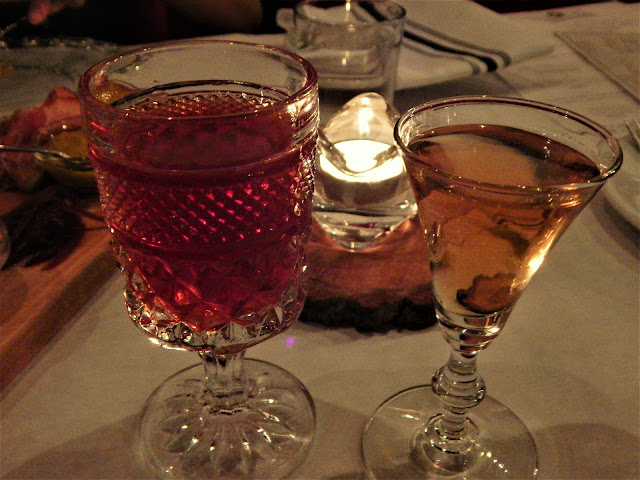 We skipped salad and soup and delved into the next course which was Smørrebrød, Danish opened faced sandwiches. It traditionally has a buttered rye bread (dense, dark brown bread) and pieces of meat or fish. We chose the orange and juniper braised pork belly with orange marmalade. The bread was topped with picked red onions, greens and the pork. The caramelized orange flavored pieces of pork were a real delight to taste buds. 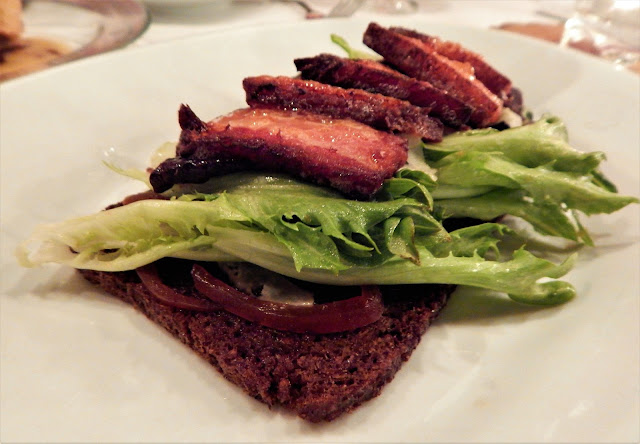 Next course was called Plates, it's more like a small entree. We have had quite a deal of meat for the night so decided on the Mushroom Strudel. It was served with aquavit cream and glogg (Swedish mulled wine) reduction. The puff pastry on outside was very flaky and the mushrooms inside creamy. The dish was well composed with the reduction. 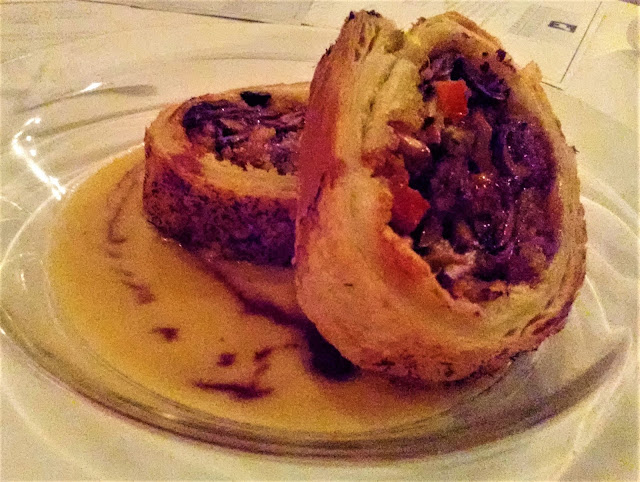 Although we were quite full we wanted to try some dessert to end the meal and the sweet date night. We ordered the Kladdkaka from the dessert specials of the night. It is a Swedish sticky chocolate cake served with whipped cream and red currents. Honestly, I wasn't very impressed with the cake. It seemed rather a bit tough than gooey or sticky. I enjoyed the whipped cream with the red currents though. 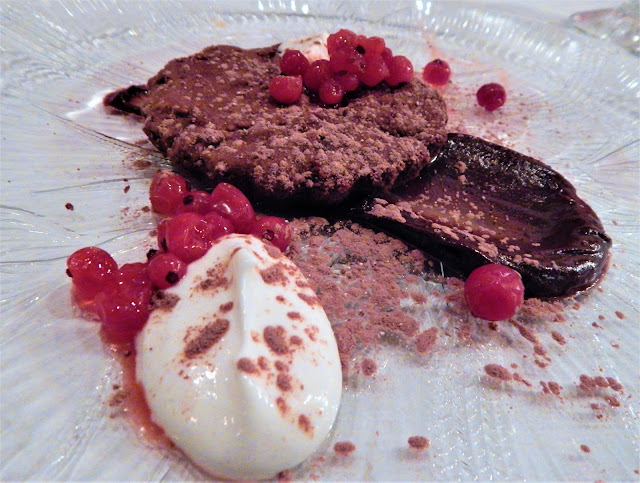 Krokstrom really amazed us with their food. The ambiance is very inclusive, perfect for a date night and yet great for group dining. The well thought-out menu, good service, aesthetically composed plates and the unique Scandinavian flavors really stand out. We almost made a short trip to Scandinavia on our anniversary night sitting right in the heart of Kansas City.

Note: This is not a sponsored post, the opinions are completely my own and the bill was entirely paid by us.
Labels: eating out food kansas city memoirs Scandinavian food winter