Jane said, " I have a task for all of you. You have to imagine what life was like, living in these cliff dwellings centuries ago." We being the dwellers of a world where only a thin line separates man from machines, I thought it was almost impossible to do so. But as we climbed down the steps the past gradually invaded all my senses. 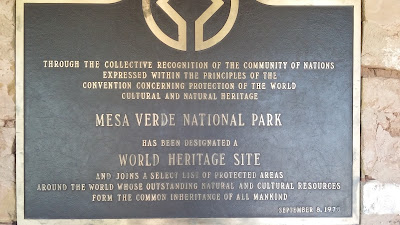 I was standing in front of the largest cliff dwelling in North America, transported to an era where man and nature lived in  harmony. I was at Mesa Verde National Park, Colorado, a UNESCO World Heritage Site. In Spanish 'mesa' means 'table' and 'verde' means 'green'. This table-land was home to hundreds of  Ancestral Pueblo people, an ancient Native American race.


She picked up individuals of different ages from our group and nicely explained what their roles would have been in the social structure. Children between six to nine years would take care of the pet dogs and birds. Later boys would join the elders in farming and hunting while girls would help in grinding corn and other household chores. And by the time they turned about fourteen, they would get married and the boys would move to their wives' house. Yes, the society was matriarchal.

There are primarily two types of dwellings found in Mesa Verde, mesa-top and cliff. The major attractions in the park being the cliff dwellings like Cliff Palace, Spruce Tree House, Balcony House, Long House. These structures, mostly built around 1200 A.D., are pure architectural wonders. One is amazed by the level of scientific thinking and genius craftsmanship seeing buildings made of sandstone, wooden beams and mortar of soil, water and ash.


Round and square towers, the tallest being 26 feet, key-hole shaped kivas (round pit structures) and perfect arrangement of rooms used for various purposes like storage and living, speak of an advanced civilization living centuries ago. They chose to live in the cliffs because the natural shade and guard would protect them during extreme weather conditions, be it the sun or the snow. The cliff dwellings still breathe of a close knit community which survived the odds for years. 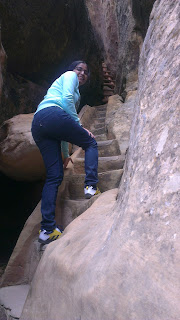 The subterranean kivas were designed in a manner that it remained 50 degrees Fahrenheit all year round. Only a small fire would keep them warm during winters. It is believed that the kivas were primarily used for ritualistic purposes. Jane explained how every kiva has a hole dug in the north of the chamber, known as the sipapu. It represents the place of emergence of the Ancestral Puebloans from the underworld. It is almost like a portal to the next higher world and its presence was a humble reminder for the dwellers of their past lower existence.

I was surrounded by an aura of a never ending and yet evolving past in those hours. Then I climbed up the steps and ladders, as if travelling through the sipapu to the next world, and the trance faded amidst the cacophony of modern world. Yet I carried with me memories, that would not fade.